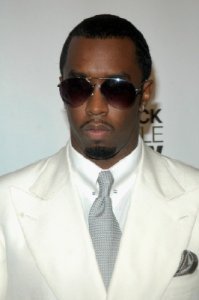 To celebrate the upcoming birth of twin girls, P. Diddy and Kim Porter threw a pretty in pink baby shower in November of 2006.

Diddy is well known for throwing a good party and their celebration was no exception.

The cute couple dressed the part, Kim with an elegant black and pink dress that had soft ruffles and Diddy with a cotton candy button down shirt with a black and pink striped tie.

They sent special invitations to announce the party to their guests...baby blocks!

They were little wooden blocks that were decorated with the info of the party and placed in a favor box with shredded paper.

Here is the cute poem they included on the blocks.

Two little girls are on the way,
Sean & Kim await the day,
With love and joy they
Wish to say, Join us please,
Come out and play! (2)

Some of the gifts they received were a pink and white chandelier, a custom made changing table and 2 cream colored cribs.

An item that never got purchased off of their baby registry was a $88,000 R-class Mercedes Benz. It's "for the twins to ride in, "Shalena Smith of Ga Ga Designs tells PEOPLE. One thing they did turn down off the registry was a $17,000 diamond-encrusted pacifier. They are realistic people. Everything (on the registry) wasn't just the bling bling." (1)

Sean and Kim welcomed their adorable twin girls on December 21, 2006. They named one D'lila Star after her grandmother and the other was named Jessie James after his. We would like to congratulate them both on their new babies.

Update: Sean and Kim split from their 10 year relationship on July of 2007. We wish them both the best.