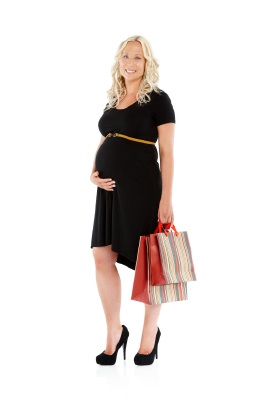 Not many people could come to my friend's shower, so I made her shower a "mobile" baby shower. I decorated up the inside of my expedition and had people who couldn't come send gift cards in lieu of gifts. We took the mom to be and shower on the road. I made little poems and task lists for the mom at each store we went to. For example, at one place she got bedding, at another she filled her diaper bag etc.

We ended the afternoon with a big meal and pedicure for the four of us. It was great fun, AND the mom got to pick out stuff she liked. I also made a video prior to the shower of congratulations from the people that couldn't be there that we watched as we ate her shower cake.

NOTE: Since Becky was successful at collecting money for gift cards for her friend's shower, we asked her for some tips on how she did it. There is a fine line in baby shower etiquette when requesting money for specific gifts. This is what she had to say about it...


That is ALWAYS a touchy subject isn't it! Here is what I did...

2. I asked the people what they wanted to contribute to, for example, bedding, clothing, diapers, etc. I believe this is the most important thing I did, because as I found out, people have their own ideas about what they want to give and why they want to give it. One person said she never felt like she had enough blankets when her children were little, so her plan was to give Jess several blankets. She ended up giving a gift card that I specified for blankets. Not only did she get what she wanted, b/c she wanted Jess to have blankets, but Jess was also happy b/c she got to pick out what she liked.

3. Recognize Them! After they picked what they wanted their portion to go to, I tried to incorporate their name into the poem. Here is an example, "You're having a baby and your Aunt Carla is SO glad, here is a card from her to help fill your diaper bag." So, the task at that store was to fill her diaper bag.

4. I made it as easy for them as I could! I picked up the money and purchased most of the gift cards.


Thank you, Becky for your great ideas!

Join in and write your own page! It's easy to do. How? Simply click here to return to babyshowerpartyideas.