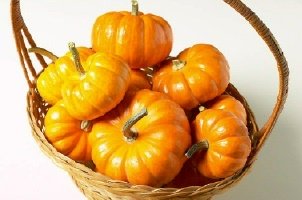 Use this game for a baby shower brain twister or a fun mommy party. You will be amazed at how little you know!

A. A vegetable
B. A protein
C. A noodle
D. A fruit

2. The largest pumpkin ever grown was:

3. When is the best time of year to plant a pumpkin seed?

4. Pumpkins will grow in every country except:

5. What is the percentage of water in a pumpkin?

6. Which state grows the most pumpkins?

7. What were pumpkins once recommended for?

A. Removal of Freckles
B. Diarrhea
C. Curing snake bites
D. Indigestion
E. Both A and C
F. Both B and D

8. What colors are pumpkins available in?

9. Which country did the tradition of carving pumpkins come from?

10. Where did the term "pumpkin head" come from in colonial times?

A. The pumpkin meat was placed on the forehead of a sick person to draw out the fever.
B. During Halloween they had pumpkin look alike contests.
C. Pumpkin halves were used as guides for haircuts in colonial times.
D. It meant they were empty headed, referring to the hollow sound made when tapping a pumpkin.

A. Food
B. Food and medicine
C. Food, medicine and mats

12. How big was the largest Jack O Lantern carving?

13. How did the pumpkin pie originate?

A. Someone accidentally poured cinnamon instead of chili powder into a pumpkin that was roasting.
B. As a dessert, colonists would hollow out a pumpkin and fill it with milk, spices and honey and then roast on hot ashes.
C. Back in colony times, a person entertaining filled a pie crust with roasted pumpkin when they realized they were out of apple pie filling.

14. In the nursery rhyme peter, peter pumpkin eater, what couldn't peter do?

15. How fast is the fastest documented pumpkin carving?

Would you like your own copy of this pumpkin trivia?

From Trivia To Pumpkin Shower Theme